The season premiere of “Being Mary Jane” aired on BET January 7th, 2014 Tuesday evening. Mary Jane played by actress Gabrielle Union is a news anchor who is successful, independent and a “single black female” searching for love. From watching the premiere, I am definitely looking forward to the next episode. The episode oozes juicy from beginning to end. 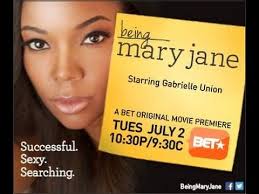 Being newly “single” with friends that also share that status, I can definitely relate to her lifestyle. My friends and I currently dating within the professional “BUPPIE” (Black Urban Professional) market in the New York metropolitan area and come across similar characters portrayed by the two love interests of Mary Jane. During the episode she encounters the following: discovering the man she was sleeping with is married; confronted by his wife and  the reality that another man she had to cancel a date with easily replaces her with another date prospect. Finally, she has to face her married love interest again and the temptation becomes too much that she is weakened by his passionate kiss.

Now I will give it to the character Mary Jane. She knows not to waste time in between men and plays the field. Weigh your options! She has one of her love interests at her house while the other is trying to access her gate using her code. She masks it pretty well and the guy seems understandable and proceeds to invite her to a concert, which she obliges to attend.

TMI (Too Much Information)

His wife approaches Mary Jane at work. Bold! The wife proceeds to ask series of questions about the details of her relationship with her husband. Questions on where her husband takes her, how long they have been seeing each other and etc. Then the questions turn on how the two of them are intimate with each other. The wife asks intricate details on the frequency and type of sexual acts the two performed together. She then goes on and asks if there were promises of starting a future and family.

I was a bit taken aback by this dialogue. TMI! If my husband or significant other was having an affair, yes I would like to know who the person is and the longevity of their affair. But I do not want to know any intimate details. While I would be able to handle it, I would  not want to know. That knowledge would be a bit too painful and damaging to my heart. Let me just deal with my mate cheating. Spare the details!!!

Now being the professional woman Mary Jane is,  she has to cancel her date plans she made with her newer date prospect due to work commitments. Understandable. However later she realizes her evening frees up. This provides her opportunity to possibly meet the guy she cancelled with for a drink. Well of course he has plans and is meeting someone else. Why is she so easily replaceable? Mary Jane called him up on his intentions of his initial invite earlier at her house. She inquired on whether the invite was extended for any random plus one chick available or he was sincerely planning on inviting her not considering anyone else. Well, he was on his way out meeting someone whom he plans to have a drink and have casual sex with. He openly admits this. But he also called Mary Jane on her dirt too. Two people trying to be playas, one always gets hurt.

Now frustrated she heads to the gym. The gym alleviates frustration…but of course her eye candy (the married guy) of course is working out as well. Wow this gets a bit personal to me as I recently had a gym situation. I ran into a guy at the gym that I went on two dates with which I discovered he is “separated” for a longer than normal period from his wife whom he still lives in the same house with. (Refer to blog post “Separated vs. Divorce- Handle It Before Pursuing My Heart”) Only difference is I was not weakened and became steamy in a lip-lock smooch-fest post workout….I kept it moving. Can’t wait to see how this scandalous situation morphs itself in the next episode.

12 thoughts on “Takeaways from Season Premiere of “Being Mary Jane” Playa Playa, TMI and Scandal”