Jay-Z and Beyonce are considered the “Power Couple” in the Hip Hop culture.  In a music video crazed, reality tv,  hyper-celebrity influenced society…there are very few examples especially in the minority community of a healthy monogamous marriage that exists between two people who are younger than the Baby Boomer generation. My peers and the younger community aspire for such a relationship….and when asked what they are looking for, it is not a surprise when they express that they seek a “bond” like Jay and Bey. 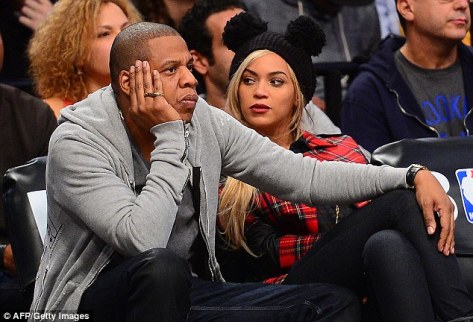 The younger community can relate to the Houston born down-to-earth singer/actress Beyonce and the B-Boy from Brooklyn turned Rapper/ Mogul Jay-Z. Many of my male friends say yeah, when I am in my 40s I will probably slow down like Jay-Z and begin a life with my queen and start a family. They emulate his approach, not seeking marriage too early before they are ready, after their established in their career and are able to be that provider. Beyonce, prior to Jay-Z was never in the tabloids with relationship scandal like many other celebrities. She epitomizes the “wifey” material that men search for and women aspire to be. For both of them, this is their first marriage…and to all of our knowledge Blue Ivy is their first child.

My generation, the 30-something as a child and a teenager had “The Cosby Show” and Will Smith and Jada Pinkett-Smith to aspire to emulate.  Many of my married friends have successfully recreated that proto-type . However, the younger generation does not relate and my still single friends who grew up with these images..memories are clouded by present-time rumor tabloids on TMZ and the songs they hear on the airwaves. The Cosby Show is now an archaic re-run which is difficult to identify with. Jada and Will-Smith children are now teenagers who are exploring their creativeness, and we now less relate to the “older couple” that has also been hit with their share of rumors.

Jay and Bey, have had an air-tight bond and were able to keep their affair mostly private. Since the elevator brawl between Beyonce’s sister Solange and Jay-Z rumors have been swirling. Alleged affairs with Rachel Roy, love child accusations and the most recent is Jay-Z alleged affair with singer Mya that was reported today by International Business Times. According to the article, Jay-Z and Mya have been having an alleged affair for two years with Jay-Z was paying Mya’s bills.

Power 105.1’s The Breakfast Club reported that OK Magazine stated that Jay-Z and Beyonce are seeking marriage counseling. This is through guidance with their long-time friend Gwyneth Paltrow. The two are to begin their “On The Run” tour that begins at the end of June.

Marriage isn’t perfect, people are human and make mistakes. Some marriages can overcome mistakes and betrayal it depends on the person and their ability to forgive.

I am rooting for the two to get it together. However, what if they don’t? While the entire weight of the future of marriage in the hip hop culture should not be on them, they are primarily the only two hip hop/R&B moguls who have the “power of influence” that are trying to do it right. Sure there are examples of P-Diddy being a great father to his tribe of children from at least three different mothers- but he is also emulating the perpetual “Bachelor” lifestyle. Which presently, men all around me are now embracing. There is the reality star/singer Tiny and  rapper T.I family…but there is trouble in paradise between them too.

Otherwise, we have the stripper culture, the side chick and main chick mentality and woman trying to prove they are a “Ride and Die” chick for a man who has no intentions of making her his “wifey”.

Our generation is more independent and focused on being “happy” with ourselves than being part of a union that sucks your happiness away….so the mentality of being happy without regards to “status” is a larger focus than in our parents and grand-parents generation. Our parents and grand-parents marriages were far from perfect. They just stayed together despite their internal suffering, unhappiness…or they got past their differences and overcame their obstacles. They worked at it and eventually found peace and found a new type of “happy”. The had patience and were resilient.

There are plenty of happily-filled marriage unions where a person’s independence and serenity is not compromised. The media doesn’t epitomize those examples, just scandal. Jay-Z and Beyonce were able to exemplify such a union to the world. Best friends, partners in crime–building that empire and room to breathe to pursue their own self-interests with each other’s support. We all look up to their relationship and aspire for that bond.

Should we be surprised, that two mogul celebrities have now encountered scandal in their marriage? Can you think of any marriage including your parents that was free of mistakes and scandal? And your parents were not in the public spot light and maybe had less temptation. Yes, we are in a society that makes it easy to walk away as opposed to working through it. I hope the two seek  the appropriate counseling and are able to resolve their differences. However, they are both human and while it may be disappointing for us if the two split, it is their lives.

As I have now re-entered the “date life” it is much different than it was 8 or 9 years ago.  I fear what courting will be like in another 17 years when my daughter becomes an adult.

What If Jay-Z and Beyonce Can’t Pull Through Their Obstacles? Will The Notion of “Marriage” Be Obsolete In The Hip-Hop Culture?

2 thoughts on “Scandal Arises In the Jay and Bey Reign- Their Influence on “Marriage” in Hip Hop!”