This is for the married men who do feel a prisoner in their marriage or the divorcee who has found passion back in their life but at the expense of their own net worth and their relationships with the kids. I discuss many issues of women…but what about the men? While this guy seems he put all the stops with babysitters, wining and dining and romantic gestures. There are many men who are just as frustrated and forget that they have to continue and date their women years after marriage. Maybe your wife would be more intimate with you! Enjoy! END_OF_DOCUMENT_TOKEN_TO_BE_REPLACED

The increasingly pervasive phrase which origined from hip hop culture is now the gold standard of what a gent expects from a lady. “Ride or Die” generally means having your man’s support through

END_OF_DOCUMENT_TOKEN_TO_BE_REPLACED

Divorce is a serious decision. Just because a person is unhappy in their marriage, does not mean the only way to attain happiness is to exit the union.  Seek out other remedies such as marriage counseling before filing the court papers.

January is a busy month, a new year, a new tax season. For many couples, this is an opportune time to file the divorce papers. You cherished the last year to claim “married” on your  1040 tax forms. For others, this is a delay of the inevitable postponed until after the holidays. Not wanting to disrupt the last bit of  family time with your children. It also could be  the downtime during the holiday season refreshed old wounds that were tucked away while being emotionally unavailable to each other as both spouses were engrossed in the daily work and family routine. Or the financial burden following the holidays that ramps up the underlying stresses already drowning your marriage. As a result, one or both partners has caved in. Whatever it is, the thoughts that have been pondering in your head are materializing to a final decision with an end resolution-DIVORCE! 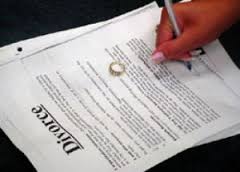 It has been exactly a year since I filed for divorce. Admittedly, I was part of the January statistic. After months of pondering over my indecision, I took the leap and marched to the court with my papers in hand and submitted them to the court clerk. Now for those that are wondering, we did not go through marriage counseling. Nope, not at all. I think both spouses have to be willing to work on their marriage. Compromise is needed. I personally do not think a mediator would have done us any good..possibly earlier on in our marriage. Well you learn your lessons, and if opportunity happens again you approach the situation differently. In fact, we both had our strong opinions in a matter, neither of us were willing to budge. The only way our marriage would have been salvaged if I would have compromised, like I always do. Well actually I did, however this time I was not happy with that compromising decision and chose to exit.

However, for others this may not be the case and a remedy could exist. Marriage is not a rosy parade all of the time. Times become hard, I mean really difficult. Despite what you have planned in life prior to marriage to secure the necessary assets, career and healthy lifestyle to promote a happy union and family, life is unpredictable. Ask that to the many of families that faced the economic turmoil in 2008 through 2010. The nest egg that was established taking from them in a second,  depreciated assets, dwindling of retirement funds they have to rebuild from scratch. The lifestyle once had now has to be modified and sacrifices made.  The mother who had difficulty becoming impregnated and has to cope with raising a special needs child that requires her to be a full-time mother. However, the family’s financial plan did not incorporate one working spouse. The consultant husband who’s family’s livelihood is partly supported by him jet setting across 9 countries in a two to three-month span with a two-week break before the next travel assignment. This resulting in him leaving the raising of his children to the equally financially contributor working wife.

There isn’t an exact algorithm that derives a blissful marriage. I am amused when discussing this with my single co-ed friends as they proceed on a cautious trek to attain the ideal mate and secure the desired lifestyle before committing to a union. While there is nothing wrong with planning, just expect the impossible. Been there done that. But I also urge those that are married and are frustrated with their partner, to look within themselves. Ask yourself, how have you contributed to the strife in your marriage? Have you been the best wife or husband that you can be? Have you expressed empathy, consideration, love, compromised your selfish desires, assistance in required household tasks and family responsibilities, have you continued to promote passion, shower complements and continue to date your spouse? If you cannot say yes to all of these questions, how about taking a different approach and asking your partner to commit as well. Re-evaluate your decision to end your marriage after a few months of changing your approach to your union. Now, if your partner is too stubborn and not willing to do the work, I understand. Life is too short. Proceed to fill out the divorce papers and march to the court. Oh well, another statistic submitting the papers to the court in January. At least you can say you put your best effort into your union.