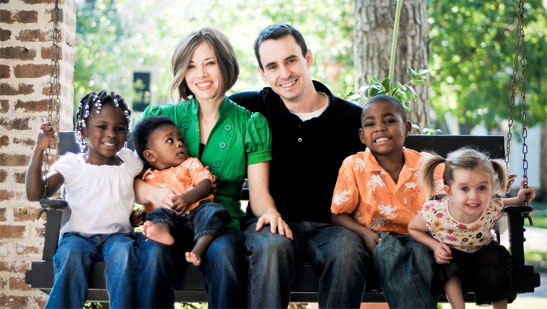 END_OF_DOCUMENT_TOKEN_TO_BE_REPLACED

On the way to school yesterday morning, my son asked: Why don’t I have any Godparents? The topic of godparents was apparently discussed at his not quite parochial school. He mentioned how all of his classmates had Godparents except him. I thought to myself, how do I explain this to him? His father’s family adopts a separate religious doctrine than myself. Let’s just say Michael Jackson’s family could attend the same congregation as his. I myself, raised Christian has attended a Baptist church my entire life. To avoid the debate of religious traditions with the in-laws, I decided that we will not bless our children, as that was not common practice in their religion and I did not want them to think I was imposing my beliefs so early in a child’s life. This was tough, but let’s just say given the already strict standards of his religion, I wanted to make sure we could all sit at the table as a family when visiting the in-laws. This decision was not necessary accepted by my side of the family, but they are my children, and they were eventually understanding, well some were. I feel upon reaching mature enough age, they can decide their religious commitment through baptism. Until then, since I was the only parent active in my religion, my kids attend my church, embrace our holidays and for their well-being celebrate birthdays and all other joys kids experience. When visiting his family, my children attend their place of worship. My view is that despite some very distinct differences in how we serve our God, both religions believe in the same higher being and morals in life.

Now divorced, I still agree with my parenting choices for my kids with him. This does not change. If I re-marry and have another child, and my partner wants our child blessed, it will happen. Maybe the designated godparents for that child, will have to accept that they may have to extend their godparents services to my other two children and be considerate of the gifts shared so all my kids can appreciate.

This was the first that I had to explain to my son his parents religious differences. He could not understand why he did not have Godparents. I went on to tell him about the differences in his parents religions and how he did not need Godparents, because he has more than enough aunts and uncles and friends of the family who love and adore him.  I discussed the purpose of a Godparents and made him feel secure knowing that if something ever happened to his mother or father, he will not have to worry about someone from the family not taking care of him. While the answer was not 100% satisfying to him, he had a clear understanding of his parents religions, some of the key differences and how he has freedom of choice to blossom to whom he desires.